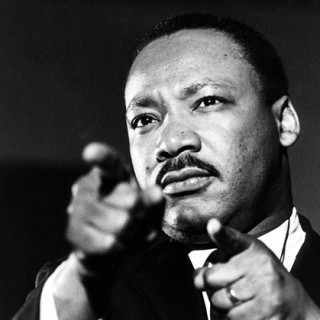 Martin Luther King, Jr. was an African-American clergyman who advocated social change through non-violent means. A powerful speaker and a man of great spiritual strength, he shaped the American civil rights movement of the 1950s and 1960s. King was pastor of the Dexter Avenue Baptist Church in Montgomery, Alabama from 1954-59. There he led blacks in the Montgomery bus boycott of 1955-56, an action inspired by the arrest of Rosa Parks when she refused to give up her seat on a public bus. Racial segregation on city buses was ruled unconstitutional in 1956; the boycott ended in success, and King had become a national figure.

King returned to his home town of Atlanta in 1959 and became co-pastor with his father of the Ebenezer Baptist Church, a position he held until his death. On the 100th anniversary of Abraham Lincoln’s Emancipation Proclamation in 1963, King organized a march on Washington, D.C. that drew 200,000 people demanding equal rights for minorities. King won the 1964 Nobel Peace Prize, becoming at the time the youngest recipient ever. His writings included Stride Toward Freedom (1958, a history of the Montgomery bus boycott), Why We Can’t Wait (1963) and Where Do We Go From Here? Chaos or Community (1967). King was shot to death by James Earl Ray in 1968 while visiting Memphis, Tennessee.