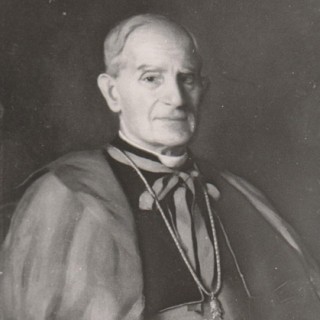 Dun Karm, painted by Caruana Dingli. He was educated at the Seminary between the years 1885 and 1894 and then proceeded to study philosophy in 1888 and theology in 1890 the University of Malta. He was ordained priest in 1894. From 1895 to 1921 he taught various subjects at the Seminary: Italian, Latin, English, arithmetic, geography, cosmography, ecclesiastical history and Christian archaeology. In 1921 he was appointed assistant librarian at the National Library of Malta and in 1923 directory of circulating libraries, a post he held till his retirement in 1936.

In 1921, Albert Laferla, the director of education, asked Dun Karm to compose some verses to a music score by Robert Samut. The Innu Malti was sung for the first time in 1923. In 1941 it was officially designated the national anthem, a status confirmed by the Constitution at independence in 1964.

In 1921 Dun Karm was one of the founding members of the Għaqda tal-Kittieba tal-Malti and on the death of Ġużè Muscat Azzopardi in 1927, he was elected president of the Għaqda and later editor of the official organ, Il-Malti. He carried out these functions till 1942 when he was nominated honorary president of the ghaqda for life. In recognition of his contribution to Maltese literature, he was granted a D. Litt (honoris causa) by the Royal University of Malta in 1945 – the first time the University granted such an honour. A year later he was awarded the Ġużè Muscat Azzopardi gold medal. Queen Elizabeth II decorated him with the Commander of the Order of the British Empire in 1956. In 1957 the Maltese government issued him an ex-gratia pension in recognition of his services to Maltese literature. During his lifetime he was also honoured as the National Poet of Malta.

Before 1912 Dun Karm wrote only in Italian. His first known published poem is La Dignità Episcopale (1889) after which he published Foglie d’Allora (1896) and Versi (1903) another collection of Italian poems.

Dun Karm often found poetic expression in his solitude, which was eventually accompanied by a high degree of spiritual balance. His poetry reflects a background of village life crowned with an atmosphere of family feelings and it also portrays the Maltese countryside with a perspective imagination. It synthesises the popular culture of the Maltese people, which is quite evident from the rural characteristics that furnish its local identity with the literary culture based largely on Italian romanticism.

His first works in Italian reveal an early life of peace and calm; after the death of his mother, solitude became his companion. When he decided to make Maltese the medium of his creativity he poetically explored the history of Malta to confirm its cultural and national identity. At the same time some of his best poems illustrate an inner journey of sentimental and more experience. His poetry exhibits great subjectivity but it also expresses his country collective aspirations. Both the personal and the national sentiments are treated from a deep religious viewpoint that discusses existentialism The spiritual crisis in Il-Jien u lil hinn Minnu is analyzed in universal human terms that illuminate man’s existence and insist on the inexplicability of the relations between God and man, except for the latter’s absolute acceptance of the formers hidden power.

Dun Karm’s writings include Żewġ Anġli: Inez u Emilia (translated in 1934 from an Italian novel by D Caprile) Besides these he wrote a few critical works. He also compiled a dictionary between 1947 and 1955 in three volumes, Dizzjunarju Ingliż u Malti.