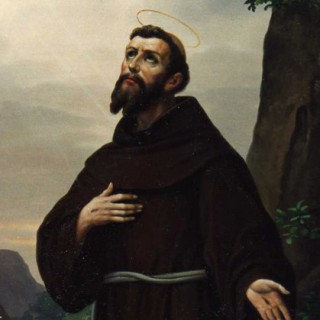 Francis Bernadone was born in Assisi in 1182 to Pietro and Picca Bernadone. Pietro was a cloth merchant and probably the richest man in Assisi. He anticipated even more wealth as the young Francis had demonstrated keen business skills. Francis, however, was unlike his greedy father. Rich in natural virtue, he was always quick to share his good fortune with his friends and even with the poor. Known as the king of youth, for his joyful nature and popularity, his primary aspiration was to be a knight. In 1205, an opportunity arose to fight for Pope Innocent III. Francis jumped at the opportunity, butthirty miles into the excursion he fell ill. As he recuperated, he heard the voice of God asking him: Francis who can do more for you the lord or the servant? Francis answered, the lord. God replied: Then why do you leave the lord for the servant, a rich lord for a poor man? And Francis asked, Lord, what would you have me do? God said, Return home and you will be told what to do. From then on, Francis began to desire to serve the King of kings and to be a holy knight in His court.

Francis was a changed man, but the interior battle every soul must face had just begun. His love grew for the poor, and Francis himself began to embrace a life of poverty. In 1206, while on a journey, Francis met a leper and was immediately repulsed; but overcoming his lower nature, he reached out and embraced the man. Afterwards, he exclaimed, what had formerly been bitter, had become sweet; and what was formerly sweet, had become bitter. As he came to recognize Jesus in the poor and His beauty and Providence in nature, his conversion deepened. One day while Francis was praying before the now famous San Damiano crucifix, especially pondering Our Lord’s will, Jesus spoke to him from the cross: Francis, repair My house which, as you can see, has fallen into ruin. Immediately, Francis began to rebuild the church of San Damiano, which was in ill-repair, and other churches as well. He begged supplies for the love of God. At first people mocked Francis thinking he was crazy, but his Gospel witness soon inspired a band of followers which included his former party friends, nobility, and clergy. He even won the support of Bishop Guido of Assisi who recognized grace working in the Poverello. His father, however, remained indignant. In 1209, a formal way of life was adopted by Francis. After Mass, he was inspired to open the Scriptures three times. The three verses were as follows: 1) If you would be perfect, go and sell all you have and give to the poor, and follow me; 2) Take nothing with you for the journey; and 3) If any man will follow me, let him deny himself, take up his cross and follow me.

Francis determined that he and his followers would observe these words of Our Lord without interpretation, and that they would be known as the Penitents of Assisi. In 1210, Francis and his early followers journeyed to Rome to seek the approval of Pope Innocent III. The Holy Father, moved profoundly by Francis’ apparent sanctity, blessed him and his companions and verbally approved the early rule. (The formal rule of the Friars Minor, still observed by Franciscans today, was written much later and approved in 1223.) Having laboured joyfully to rebuild three churches, and ever sensitive to the Holy Spirit, Francis came to realize that God was using the order not merely to restore dilapidated buildings, but to rebuild the Catholic church weakened by the secularism that threatens her in every age. His charity, humility, penance and preaching, Eucharistic and Marian devotions, inspired many to return to the Gospel. His imitation of Jesus Crucified and countless miracles sparked a great Catholic renewal. Through grace, Francis had become so united to Jesus in his sufferings that in 1224, around the feast of the Holy Cross, God blessed him with a gift previously unknown of in Christian history – the stigmata. While Francis was praying and fasting on Mount La Verna, he asked Jesus to allow him as much as possible to feel the sufferings He felt in His body and soul during His Passion. The Crucified Jesus then appeared to Francis as a fiery seraph angel and impressed His precious wounds, nails and all, on the hands, feet, and side of Francis. He suffered tremendously the last two years of his life with the stigmata, and he also patiently endured a series of bitter sicknesses. Inevitable, tensions, another cause of great suffering, had emerged in the Order. He saw the Order grow by leaps and bounds, but longed for the simplicity of the early days which was no longer possible because the Order had grown so large. Francis remained a constant witness to the Catholic faith, always inspiring the faithful to a deeper observance of the Gospel, and his spirit lives on today in those who strive to live the Rule of the Friars Minor, of the Poor Clares, and of the Third Order. St. Francis died on the eve of October 4,1226 lying on the bare floor, naked and poor in the eyes of men, but rich in God’s grace. He was canonized on July 16, 1228 by Pope Honorius III, and his feast is observed on October 4. Among his last words was a call to continue the work of renewal in the Catholic Church: Let us begin again, for until now we have done nothing. May each of us do our share to spread the Gospel, the true Catholic faith!