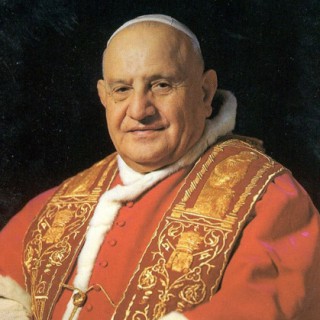 Pope (1958–63), born in Sotto il Monte, N Italy. He was ordained in 1904, served as a chaplain in World War 1, and was subsequently apostolic delegate to Bulgaria, Turkey, and Greece. Patriarch of Venice in 1953, he was elected pope in 1958 on the 12th ballot. He convened the Second Vatican Council (1962–5) to renew the religious life of the Church and to modernize its teachings, disciplines, and organization, with the aim of eventual unity of all Christians. His beatification was announced in 2000.

John XXIII’s personal warmth, good humor and kindness captured the world’s affections in a way his predecessor, for all his great learning and personal holiness, had failed to do. While Pius would look slightly away and up from the camera whenever his photograph was taken, John would look directly at the camera and smile.

On 25 December 1958, he became the first pope to leave Vatican territory since 1870, when he visited children suffering from polio at the Bambin Gesù hospital and then visited Santo Spirito Hospital. The next day he visited Rome’s Regina Coeli prison, where he told the prisoners: “You could not come to me, so I came to you.” These acts created a sensation, and he wrote in his diary: …great astonishment in the Roman, Italian and international press. I was hemmed in on all sides: authorities, photographers, prisoners, wardens…

Far from being a mere “stop gap” Pope, to great excitement John called an ecumenical council fewer than ninety years after the Vatican Council. Cardinal Montini remarked to a friend that “this holy old boy doesn’t realize what a hornet’s nest he’s stirring up”.[4] From the Second Vatican Council came changes that reshaped the face of Catholicism: a comprehensively revised liturgy, a stronger emphasis on ecumenism, and a new approach to the world.

Known affectionately as “Good Pope John” and “the most loved Pope in history” to many people, on September 3, 2000 John was declared “Blessed” by Pope John Paul II, the penultimate step on the road to sainthood. Following his beatification, his body was moved from its original burial place in the grottoes below St Peter’s Basilica to the Altar of St. Jerome and displayed for the veneration of the faithful.