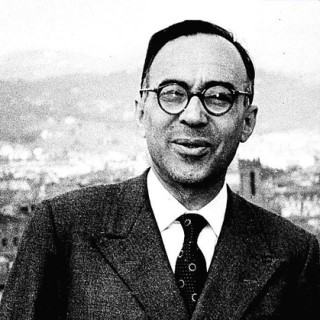 Giorgio La Pira (January 4, 1904- November 5, 1977) was an Italian politician who served as mayor of Florence twice (1950-1956, 1960-1964). He also served as deputy of the Christian Democratic Party and participated in the assembly that wrote the Constitution of Italy after World War II. In his public and private life, La Pira was a tireless champion of peace and human rights who worked for the betterment of the poor and disenfranchised.

The son of a Sicilian packing-house worker, La Pira was born in Pozzallo to a family of modest means. His Catholic upbringing, especially the teachings of St. Francis of Assisi, played a big role in shaping his political and philosophical beliefs. He saw everything he did and every position he took as an expression of his spiritual beliefs.

After studying accounting in Messina, La Pira received a law degree from the University of Florence in 1925. He became professor of Roman Law there in 1933. His openness helped him achieve a cordial relationship with his students.

On the eve of World War II, La Pira founded the review Principles, which promoted human rights and openly criticized fascism. During the war he continued his outspoken campaign against the fascists. After his offices were raided by the Italian police, La Pira escaped to Siena, then Rome. After the war, La Pira set about rebuilding Florence, which like most Italian cities at the time, was struggling to recover from the destruction and misery of war. As mayor he steered Florence away from the haphazard reconstruction typical of other Italian recovery efforts. He believed the focus of rebuilding should be self-sufficient neighbourhoods. As La Pira was fond of saying, “Towns, not houses.”

These neighbourhoods centred around local shops, public gardens, markets, churches, schools, and tree-lined streets. The most well-known of these is Isolotto, or “little island.” These revitalized neighborhoods became the heart and soul of post-war Florence and continue to thrive to this day. Additionally La Pira lead the reconstruction of bridges, such as the famous Santa Trinita Bridge. Other important public works projects included such job creating projects as the expansion of the water works, a waste system, and public transportation systems.

At times La Pira took an even more active role in job creation. When Florence’s oldest industrial plant “Pignone” threatened to close due to a slump in demand, La Pira persuaded Enrico Mattei, President and CEO of the public energy conglomerate ENI to take it over, thus saving more than a thousand jobs. The company, later renamed Nuovo Pignone, is still in operation currently as a division of General Electric.

La Pira was a Dominican tertiary, i.e. a lay member of the Dominican order, who took his Christian faith quite literally. In the years following the war, it was not uncommon to see him in public barefoot, having given away his shoes, clothing, and most of his salary. He was also active in national and international politics. In 1946 he was elected to the Italian Constitutional Assembly where he played a major role in drafting the Italian Constitution. Despite sometimes intense criticism, La Pira paid many visits to Moscow, China and even Hanoi, throughout the Cold War era. La Pira also worked to move Arabs and Israelis forward in the peace process. Until his death in 1977, La Pira promoted issues such as disarmament, the importance of third world development, and tolerance among world religions.

In 1986, the Catholic Church began the process of Giorgio La Pira’s beatification. On the occasion of the 100th anniversary of the birth of Giorgio La Pira, John Paul II praised “the holy mayor”: “Before the powerful of the earth, La Pira expressed with firmness his ideas as believer and as a man who loved peace, inviting his interlocutors to a common effort to promote the fundamental good in different ambits: in society, politics, the economy, cultures, and among religions.”