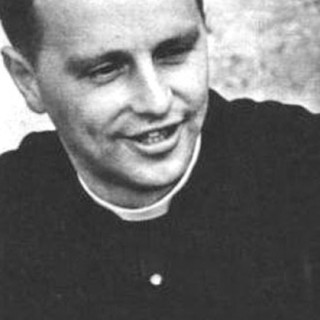 Lorenzo Milani Comparetti was the second son of Albano Milani and Alice Weiss. Lorenzo was a friendly and good-natured child. In his youth he was not a good student, but between 1941 and the 1943 he studied painting in Milan. In the summer of 1942, during a holiday in Gigliola (Montespertoli), Lorenzo re-decorated a chapel; he came across an old book in the chapel, took great interest in it, and started to study Christianity. Lorenzo was born in a family which gave little importance to religion; and his grandfather and great-grandfather had anti-clerical views, while his mother was a non-practicing Jew. Lorenzo’s parents only baptized their children to avoid trouble in the fascist era. Lorenzo always called it his “fascist baptism”. In June of 1943 Lorenzo became a Christian. Don Raffaele Bensi, a priest, became a close friend of Lorenzo and his spiritual director. On 12 June 1943 Lorenzo was confirmed by cardinal Elia Dalla Costa. On 9 November 1943 Lorenzo entered the seminary of Cestellano in Oltrarno, and quickly got into trouble because he questioned many of the rules and practices that he found very different from the fresh sincerity of the Gospel.

Milani became a priest on 12 July 1947 in the Duomo di Firenze, the cathedral of Florence, and was sent to the Church of Calenzano as an assistant priest. He worked in a school for working class children, and became a close friend of other priests – Danilo Cubattoli, Bruno Borghi and Renzo Rossi – as well as the author Agostino Ammannati. During his work at the church of Calenzano he wrote a book called “Esperienze Pastorali” (Pastoral Experiences); when Pope John XXIII read it, he said that the author must be “a madman who has escaped from the asylum.” In December of 1954, due to conflicts with the Florence curia, Milani was sent to the small village of Barbiana (Vicchio, Firenze). Barbiana was a very small farming community, and Milani spent the rest of his life in exile over there. In Barbiana Lorenzo set up the first “full-time school” just for the working-class children, who often used to work on the farm with their parents. In May of 1966, at the School of Barbiana, Milani and the students wrote a “Lettera ad una professoressa” (“Letter to a teacher”), which discussed the problems with ordinary schools, that educated the rich while leaving poor people illiterate. Many former students of this school are now active in politics, trade unions, or consumer rights campaigns.

Because of some of his expressed beliefs (such as “I affirm the right of the poor to oppose the rich”) some people wrongly considered Milani to be a “Catholic Communist”. He also wrote in favour of conscientious objection, and against war and military force, once more distancing himself from Catholic tradition and teaching. He was prosecuted for this by the state, and acquitted; the prosecutors appealed, but he died before the judgment was passed.