Women from One World 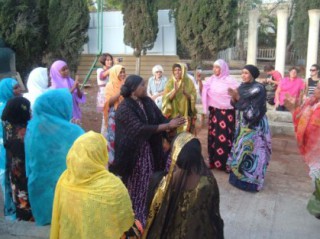 An international group of women (and a few men) gathered at the Peace Lab in Hal Far to unite in celebration of diversity and humanity.

The special event, named Women from One World, was organised by MSF (Medecins Sans Frontieres) and was an opportunity for the Somali women from the Open Centre, Hal Far to share their culture with women from Malta and other countries. They had prepared a wonderful spread of food, including delicious Samosas and Cous Cous. Soon the party was in full swing; our hands were hennaed with beautifully intricate patterns and we were led by the Somali women to dance with them to the beat of music from their homeland. Those of us who were initially a little shy, were gently coaxed by these women as they stretched out their hands in friendship. Before long, all women were dancing together in one big circle. It was more than amazing to see the women living in Hal Far, who face such huge difficulties, laughing and enjoying themselves. In fact, when organising the event, MSF did not impose anything on them and everything was done in accordance with the women’s suggestions and wishes.

Also in attendance was Katie Gonzi, wife of the Prime Minister. Who warmly embraced and chatted with the women, her genuine affection and openness a lesson to all.

It was also a chance for everyone to thank MSF for their wonderful work in Malta over a 2 year period.

Hopefully, this event will be just the beginning of a longer process of unification and will bear fruit for all involved.