Priests and Theologians Visit from Munich 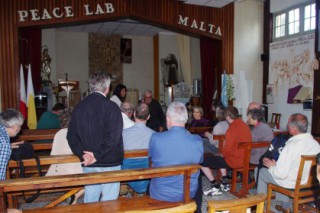 A group of seventeen priests and fifteen theologians in the field of pastoral care as well as some couples visited the John XXIII Peace Lab on the 16th of April 2015.  They come from the diocese of Munich, Germany.  They joined our congregation to share Eucharist and prayers during Mass celebrated in our sanctuary.

Elisabeth Scholbeck, leader of the group, introduced them to the assembly and explained the purpose of the visit.  They wanted to know how is the running of the Peace Lab and how they can better seek our guidance in their work with refugees.

Fr Dionysius Mintoff O.F.M. welcomed the group and gave  a brief history of the Peace Lab: “It is a mistake” he explained “to view this movement for peace in isolation from what was happeneing in Malta and in society around the globe when it was founded and what is happening today.  During World War II, Hal Far was the centre of all war activities.  The war was monitored from this tiny village and here there was the sole airfield and barracks to give room for fifteen thousand Air Force and Naval personnel from all over the commonwealth.  Everything in Malta and Europe was affected by military and naval services and social change.  Those events marked the history of World War II

As Franciscans we were determined to sow peace and love once more as part of our mission.  We were thinking globally.  This led us to give foundation to Franciscans International observing the ups and downs of the United Nations and suggesting our dose for peace.  After thinking globally we started acting locally.  That is the reason why we started selecting this spot famous for its description by Sir Winston Churchill the Prime Minister of Great Britain “as the most active locality that gave space for the Allies in World War II. “  We changed it into an oasis of peace where everybody can meet free to talk and to listen to others.  These factors were significant to underline the process of change in religious and secular institutions.  The catalystic agent of that change was Pope John XXIII.  So it was appropriate to select him as patron of this movement.  We called it ‘laboratory’ because we have been constant all the time to study issues as experiments to touch topics geared for education for peace during the span of more than forty years of our work here.

In 2001 when the first boats of African asylum seekers landed on our shores a new challenge cropped up.  A corner of Africa was transferred as our neighbour across the road.  The first years with Eritrean refugees were hard and demanding.  Through the example of St Francis who asked us to be always present among the poorest we gave them shelter, hope and love.  This experience has given us the strength to remain open to them here at the Peace Lab where Eritreans, Ethiopians,Somalis, Ghanaians and others from Mali, Niger and Ivory Coast live with us together as one family – truly as you can judge after your tour here – one family and a happy community.  You are free to see the flags of all these countries on one roof – the chapel and mosque in the same area – the school and clinic in the centre and the door open 24 hours a day.