School Visits to the Peace Lab 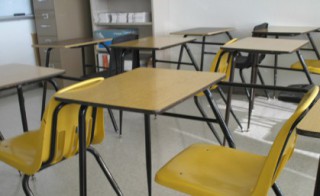 Every Tuesday morning the Peace Lab opens its doors to students from State and Private Schools.

This report by a group of students illustrates one in a series of visits.

Monday 15th March was an important day for form 4 Geography Students. These were the first students in Malta to be taught a lesson in empathy and understanding with regard the immigrant population in Malta.

As part of their geography studies, the students had learnt about push and pull factors of migration – why people are forced away from their country and attracted to others. They had also studied types of forced migration. What became very evident during the lessons was that most students had preconceived ideas about migrants due mainly to negative media images and general misunderstanding. In fact many students had the beginnings of racism already ingrained into them.

As a result of a heated class debate, it was decided to take the class to the Hal Far Peace Lab. where a lot of work is being done to integrate these people into Maltese society. The class was greeted by a bunch of existed immigrant children’s faces. They were then taken into a room in the chapel where the priest explained to the class the history behind the church and the work it is doing. The students enjoyed looking at all the beautiful, foreign crafted artifacts whilst listening to stories told by two immigrant men as to why they left their country and what difficulties they are facing here. They then took the opportunity to interview the men with questions pre-prepared in class. Afterwards they were taken to chapel where they said prayers.

It was then time to go to the chapel classroom where the students were told true life stories about the journeys undertaken by these people and their hopes and dreams for the future. Their situation was compared to when Maltese migrated for a better life abroad and the sacrifices and heart breaking decisions that had to be made before reaching such an important decision in their lives.

The class was then proudly shown a simple house in the church grounds where two refugee families are living and this was compared to the horrific conditions at the open detention center situated nearby. They also talked to the immigrant children and were shown some of the artistic crafts made by these people using recycled material.

After the outing students will prepare a project that will reinforce and integrate all information learnt about the immigrants, including the results of questionnaires about different categories of people’s perceptions of the role and function of immigrants in Malta. Most important of all the children can make their own judgements about the rights and wrongs of accepting these people in Malta and try to come up- with solutions to some of the problems being currently encountered. Any teachers wishing to undertake a similar exercise should contact Father Mintoff at the Peace Lab, Hal Far.