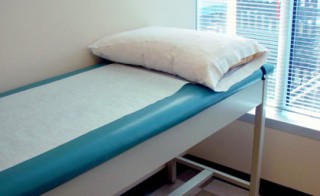 Oiwas Clinic (Organisation for the Integration and Welfare of Asylum Seekers)

Several doctors came forward to give a weekly free service. Dr Emmanuel Fenech started his volunteer work specializing in children’s needs whilst Dr Nigel Camilleri in those for women. Mr Richard Bilocca is acting as coordinator.

It is hard to describe the way we were treated at both Oiwas Centres Hal Far. The immigrants flocked the clinics in a desperate cry for help. The permanent state of health insecurity was evident in the female immigrants dreadfully searched for assurance in the Peace Lab Clinics for problems that conditioned their quality of life for months.

Dr Nazareno Azzopardi is paying a weekly visit providing medicine and care. Here the Peace Lab does not only offer immigrants help but also a source of comfort and security.

Although one could distil joy from the faces of the immigrants their reaction was characterised by an internalised panic. The permanent state of health insecurity was evident as the immigrants dreadfully searched for assurance in the problems that conditioned their quality of life for months.
This is a humanitarian service that operates on the kindness of volunteers and other supporters. We are continuously striving to make the most of our limited yet inexhaustible resources. We hope that in the near future we would be able to register an increased wellbeing on our patients by carefully monitoring their improvements through our medical records.

February 2009 the Peace Lab in conjunction with Medicine Sans Frontiers has opened a clinic within it’s grounds. The Medicine Sans Frontiers team assist those who are living in the area and alleviate the stress placed on the Government Polyclinic at Floriana. This is not an alternative but a complimentary service supported by the Health Ministries Primary Health Department.

It has been recognised that early intervention within the area of health reduces the reliance on poly-clinic and hospital services whose resources are already fully stretched.

M.S.F. (Medicines sans Frontiers), also employs cultural mediators at both the Peace Lab and the Floriana poly-clinic to translate, explain and communicate procedures to the patients and is a diagnostic tool for the health professionals.

Psychological assistance is also being provided at the centre and there are plans to develop the services further.