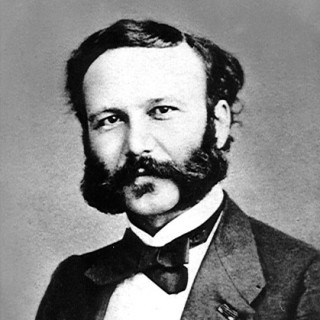 Born in Geneva on 8 May 1828, came from a devout and charitable Calvinist family. After incomplete secondary schooling, he was apprenticed to a Geneva bank. In 1853, he travelled to Algeria to take charge of the Swiss colony of Sétif. He started construction of a wheat mill, but could not obtain the land concession that was essential for its operation. After travelling to Tunisia he returned to Geneva, where he decided to approach Napoleon III to obtain the business document he needed.

At the time, the Emperor was commanding the Franco-Sardinian troops fighting the Austrians in northern Italy, and it was there that Henry Dunant decided to seek him out. This was how he came to be present at the end of the battle of Solferino, in Lombardy.

Returning to Geneva, he wrote A Memory of Solferino, which eventually led to the creation of the International Committee for Relief to the Wounded, the future International Committee of the Red Cross (ICRC). Dunant was a member and acted as secretary. He was now famous and was received by heads of State, kings and princes of the European courts. But his financial affairs were floundering and he was declared bankrupt in 1867. Completely ruined, he was in debt for almost a million Swiss francs (1860s value).

As a result of the scandal which this bankruptcy caused in Geneva, he resigned from his post as secretary of the International Committee. On 8 September 1867 the Committee decided to accept his resignation not only as secretary but also as a member. Dunant left for Paris, where he was reduced to sleeping on public benches. At the same time, however, the Empress Eugénie summoned him to the Tuileries Palace in order to consult him on extending the Geneva Convention to naval warfare. Dunant was made an honorary member of the national Red Cross societies of Austria, Holland, Sweden, Prussia and Spain.

During the Franco-Prussian War of 1870, he visited and comforted the wounded brought to Paris and introduced the wearing of a badge so that the dead could be identified.

When peace returned, Dunant travelled to London, where he endeavoured to organize a diplomatic conference on the problem of prisoners of war; the Tsar encouraged him but England was hostile to the plan.

An international congress for the “complete and final abolition of the traffic in Negroes and the slave trade” opened in London on 1 February 1875, on Dunant’s initiative. There followed years of wandering and utter poverty for Dunant: he travelled on foot in Alsace, Germany and Italy, living on charity and the hospitality of a few friends.

Finally, in 1887, he ended up in the Swiss village of Heiden, overlooking Lake Constance, where he fell ill. He found refuge in the local hospice, and it was there that he was discovered in 1895 by a journalist, Georg Baumberger, who wrote an article about him which, within a few days, was reprinted in the press throughout Europe. Messages of sympathy reached Dunant from all over the world; overnight he was once more famous and honoured. In 1901, he received the Nobel Peace Prize.

Henry Dunant died on 30 October 1910. The date of his birth, 8 May, is celebrated as World Red Cross and Red Crescent Day.